Corporate systems are drab and boring. Why is it we spend our entire day using these applications and no one has ever thought to create a personality for the application? What user likes seeing the dreaded red error messages in Salesforce? Who likes to be told they are wrong with a short, terse message?! It is like the system is saying “no you dummy, you did that wrong.” Salesforce is a cool tool, so why do we make it so boring and frustrating for users? I decided that it was time to inject some personality into the application – give it a voice of its own!

When I began thinking about how to do this, I realized that every day, users are seeing error messages. Then I began to think – if Taco Bell’s sauce packets can come up with something witty to say to you, why not Salesforce? Error messages seem to the be the natural place for a clever message. Users won’t see them unless there is an error so they won’t be distracting, and it is one of the easiest places to customize the voice of the application. I started by reviewing the most common errors and updating the messages. What I found was that they were not only boring, but not exactly informative. Here is an example.

On the opportunity object, we require products on certain stages later in the sales cycle. The original message was very basic and provided no value to the user. The updated message is more fun, and informative.

Error messages are a quick and easy way to add personality to Salesforce. But after I made all the updates, I realized that there was more that could be done! We recently re-launched Chatter (story for another post) and I found that there were a lot of users who didn’t upload their Chatter photos after several weeks. I thought that I would have a little fun with them and “Chatterbomb” their page with a Salesforce meme! I created several memes and uploaded them to their profile, then made a note on their wall. It ended up looking something like this 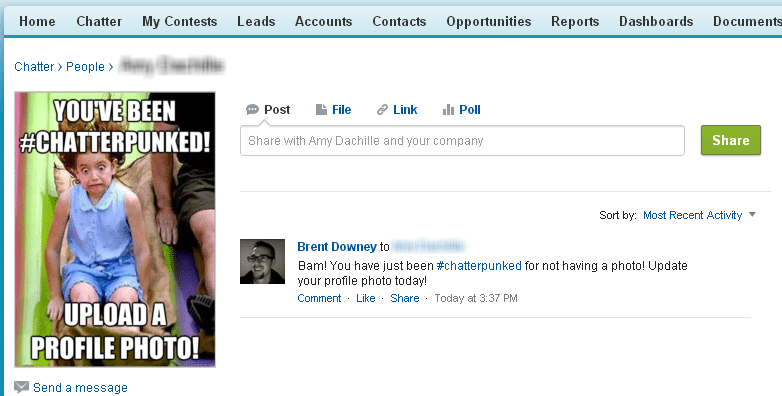 These examples are easy to do and allows users to feel that Salesforce is fun (or, at least more fun that those “other” boring corporate applications). Salesforce is a cool, hip company, so why not put some personality into their application and give the users a little chuckle while they work in the application. It will make everyone’s day better!

What do you do to make Salesforce fun! Share you ideas below!

This site uses Akismet to reduce spam. Learn how your comment data is processed.